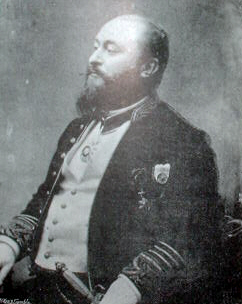 Count Alexander Louis Ferdinand de Jouffroy d'Abbans, Consul for France, with jurisdiction all over New Zealand and her dependencies, was born at the Castle of Abbans in 1851. Count d'Abbans was educated in France, where he studied for the legal profession, becoming a barrister at law. Duringt he Franco-German war of 1870, he was a volunteer in a regiment of Zuaves. Count d'Abbans has had an extended experience in official positions in various parts of the world. He commenced his career as attachť to the French Embassy at Berlin, and afterwards was at St. Petersburgh in a similar capacity. Subsequently the Count was Acting Consul at Singapore for three years, Vice-Consul at Aden for one year, and Acting Consul at San Francisco for two years. In 1885 he came to New Zealand as Vice-Consul, and resided in Wellington till 1889, when he returned to Europe. Count d'Abbans was next sent as Vice Consul [afterwards becoming Consul] on behalf of his Government to Zurich, in Switzerland, remaining till 1892, when he went as Consul to Falmouth, England. During 1893 the Count was Consul at Mons, in Belgium. He returned to New Zealand on the 16th of March, 1894, and is the first Consul sent by a European Power to reside in the Colony. He appoints Consular agents to represent his Government in the leading cities. At Auckland Mr. Thomas Russell is acting since the death of Mr. D. B. Cruickshank. The Honourable E. W. Parker, son of the Earl of Macclesfield, is the Christchurch representative, and Mr. P. C. Neill in Dunedin. Count d'Abbans is a Knight Commander of two French Orders. He married, in 1883, Ida Marie, Countess de Pulligny, and has two boys and two girls. His children were born in four different countries, viz., America, Switzerland, New Zealand, and Belgium.