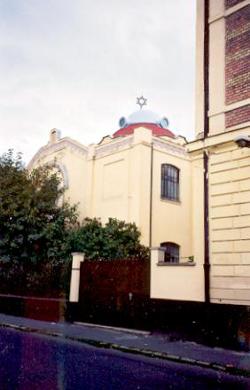 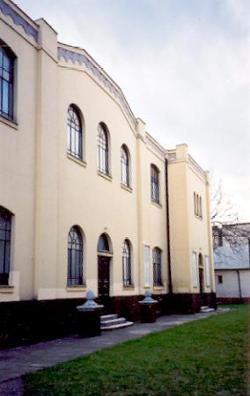 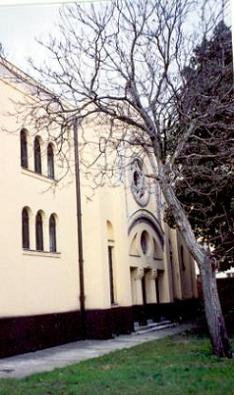 Side view and front entrance of Status Quo Synagogue, Debrecen 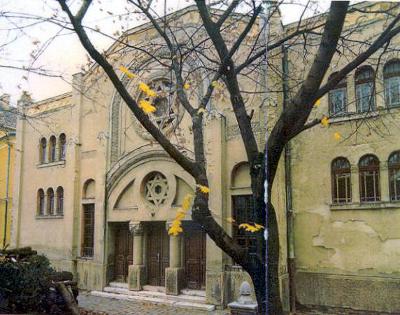 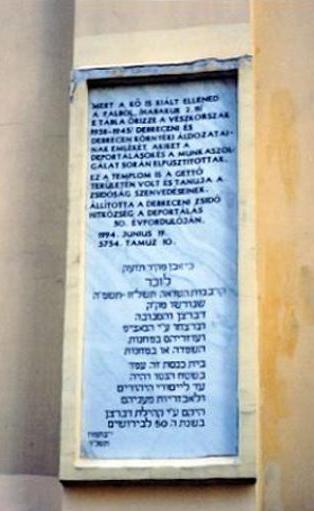 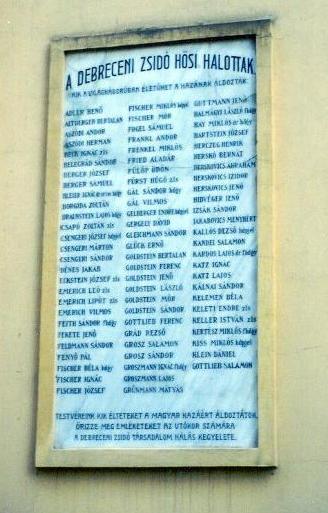 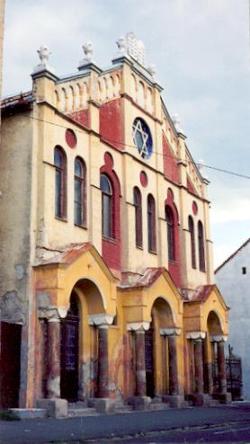 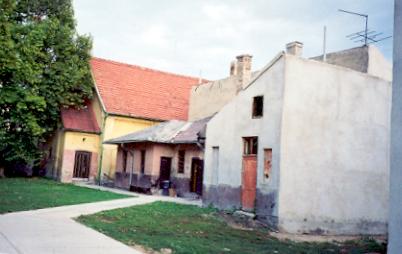 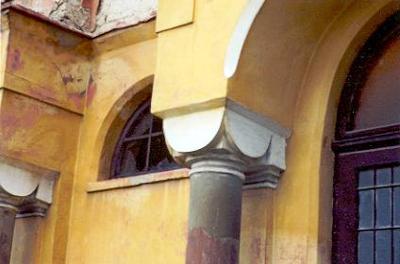 ...Debrecen. After settling into a truly Communist-era hotel, I walk from Petofi ter to Piac utca for several blocks until I reach Simonffy utca, taking the second turn right. Across the road is the Status Quo [Reform] synagogue.

It lies behind a high cream wall in a quiet street, Kapolnas utca, and luckily the gate is open. The schul is also cream, with fairly plain deco-style lines, and with a small dome topped by a Mogen David. I wander in, a large lawn beside the building, with apartments on the other side.

One of the apartment doors is open, and a lady and two men are at a table having tea. I ask permission to look around, and the lady comes out. She only speaks Hungarian, and follows me as I take pictures, but is very friendly. Unfortunately she doesn’t have a key to the schul.

The front of the synagogue is at the back of the section, in the shadow of a large tree. Around the side are some plaques commemorating the Holocaust in Debrecen, in Hungarian and Hebrew. The schul was built in 1909 and is still in regular use.

From here, I cross the road and walk to a nearby next street, Pasti utca, where the dusty careworn facade of the Orthodox synagogue stands resolutely in the centre of the street, announcing its presence with the tablets atop its peaked roof. The entrance, with three archways, opens onto the pavement. To the right is a metal-gated yard with lawn and outbuildings. This schul was built in 1913 and what I could see of the interior is in a poor state.

The exterior is a warm mixture of gold, cream and red paintwork, though the paint and plaster is peeling and chipped. Looking through the broken glass of one of the doors is a depressing sight. The lobby is in ruins, bricks crumbling, the floor covered in plaster and rubble.

Around 7500 Jews were deported to Auschwitz from Debrecen. Jewish settlement in this eastern town only began in 1840 after a decree permitted their presence, but it grew to become a major Jewish community, numbering over 10 000 prior to WW2. The city still has a Jewish population of a few hundred people.