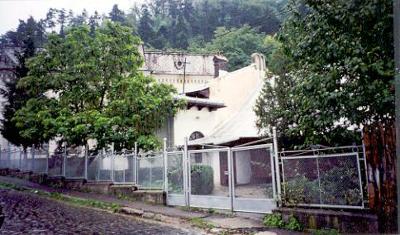 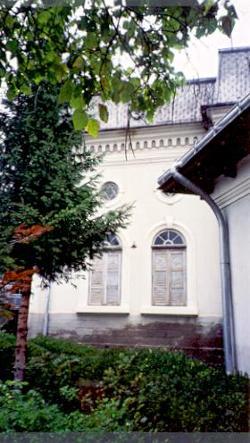 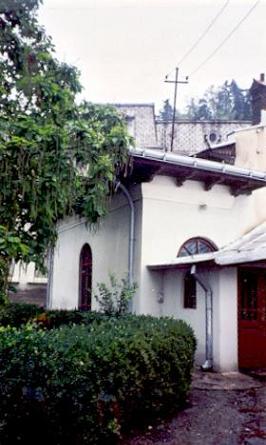 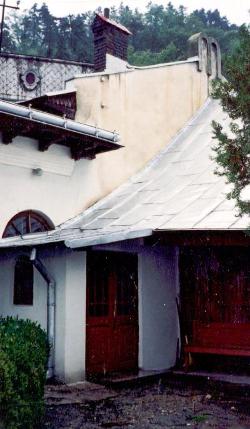 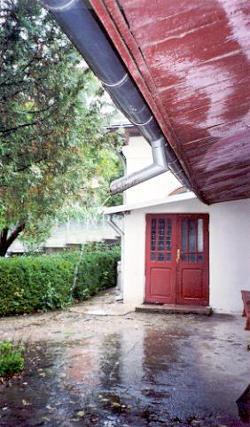 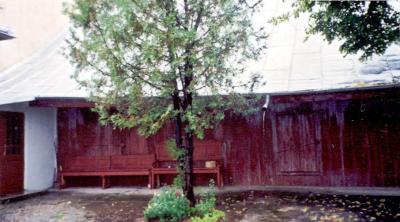 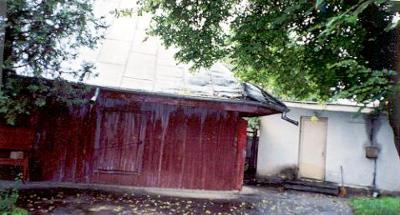 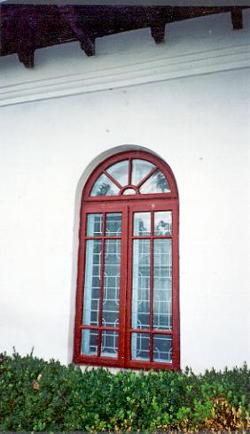 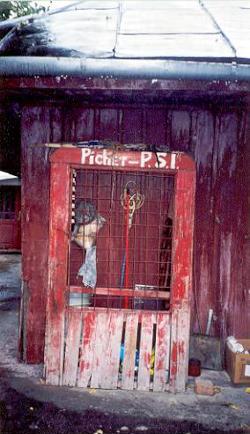 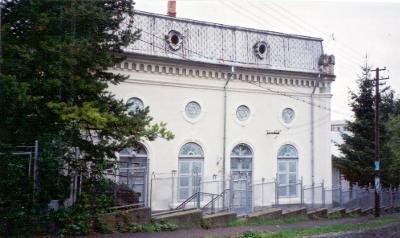 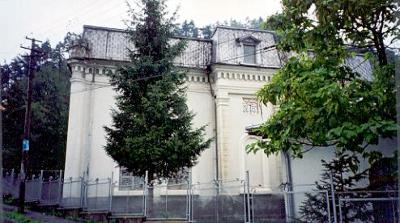 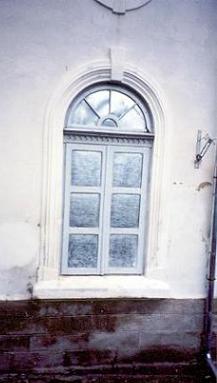 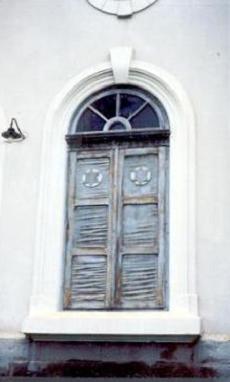 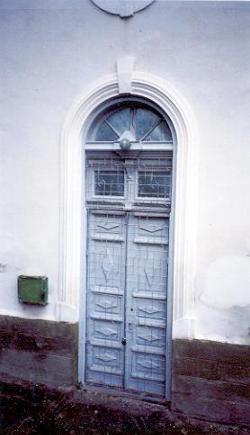 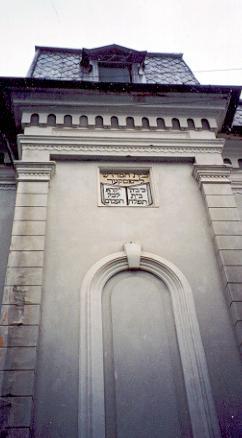 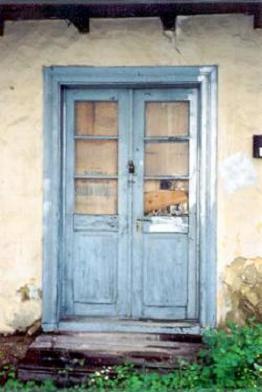 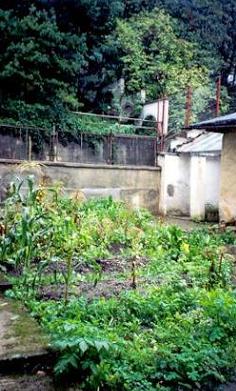 ...We arrive in Piatra Neamt at 1055, the rain quite steady, the uneven footpaths already plagued with muddy puddles to dodge. Down a few blocks to the centre, tree-lined streets, and apartment blocks with magazins [shops] on the bottom. Up a rise past a Basilica, noticing a small side street, Str. Dr. Dimitrie Ernici, leading up under the forested hill, and catch a glimpse of what looks like a synagogue.

Behind a metal fence, surrounded by a garden, with water running relentlessly from the guttering, I find the two synagogues of Piatra Neamt, side by side, yet very different in style. Directly beneath the wooded hillside is the Temple Synagogue, a traditional Moldavian schul with white walls, arched windows with a mixture of wooden and metal shutters, and a flat roof of tin. The doors are protected by a metal security grating.

The interior is described as having a small raised bimah in the centre, with a trellised frame in front of a highly elaborate Aron ha Kodesh with tromp l’oeil curtains. The walls are decorated with frescoes in false frames representing the seven gates of Jerusalem and other Holy Land themes. Frescoes of biblical animals, the stag, the lion, the tiger and the eagle, are painted on the ceiling.

The older of the two schuls, the Ba’al Shem Tov Synagogue, dating from the 1700s, is in two parts, half of wood, painted red, and the rest of masonry, and painted white. It has a gracefully sloping silver roof, and is built partly underground so as to conform to regulations that forbade synagogues to be higher than surrounding Christian buildings. The name is derived from the Ba’al Shem Tov, the legendary founder of the Hassidic movement, who was believed to have attended this schul in the 18th century.

According to my notes, the sanctuary is entered down stairs leading from a little outer prayer room where regular services are still held. Chandeliers hang from the ribbed wooden dome arching over the dull green walls decorated by stencilled flowers. Carved and gilded lions, griffins, bunches of grapes, and other decorations ornament the elaborate Aron ha Kodesh, which is topped by carved hands raised in priestly blessing. Along a shelf silver crowns from centuries-old Torahs are lined up.

At the end of the old red synagogue is a small cupboard containing primitive fire-fighting equipment, and there are several outhouses, one with a carton advertising Yehuda Matzos blocking the broken glass panels of the door. There’s also a small garden growing corn, beets and herbs and some shower cubicles.

I then start my hunt for the old 17th century Jewish cemetery of Piatra Neamt, reputedly one of the most wonderful and evocative cemeteries in Romania. It is said to climb up a steep slope at the foot of a dramatic wooded hill above the town and to contain richly carved gravestones with Polish style designs.

The trouble is that a wooded hill runs the entire length of the town. I start with a muddy track directly above the Temple Synagogue, peppered with chickens, which wends its way behind houses along the base of the hill. I feel it’s the right place, but can find no trace of any graves.

I spend about an hour walking the length of the hill, looking for any sign of a cemetery, but to no avail. I then take a break and look for something to eat as I left Bacau without breakfast this morning. Cold and hungry like the rest of Romania, and plenty of amusement to be gained from the Romanian idea of `supermarkets.’

I then resume my cemetery hunt, finding instead many starving animals, small dogs, bedraggled cats, and a pitiful kitten hiding out in a hollow beneath steps which falls ravenously on some bread and butter I give it, tearing at the tough crust with its tiny jaws.

Back to the station, catching a crowded train to Buhusi, my second destination of the day. A lady of about fifty years struggling with a handbag, two shopping bags, a sack of veges or potatoes, and a very bulky carry bag. I help her get it all up onto the train, and we await our departure as various optimists pass through the carriage hawking food, drink, newspapers and other unidentifiable objects obviously adjudged vital to the journey.

A young Orthodox priest also comes through, wearing his black robes and hat, with a long curly beard, sandles and surprisingly smooth hands. He carries a piece of card with an inscription or appeal written on it, sealed in plastic. My overloaded friend delves in her purse and gives him a donation, and he asks her name. `Flara, Popa,’ she answers earnestly, and he records it on a list. We leave about 1435.

Jewish settlement is believed to have dated from the 14th century, but most Jews arrived in Piatra Neamt in the 17th century after the Chmielnicki uprising forced thousands of Jews to flee Poland and the Ukraine. Over 8000 Jews lived in Piatra Neamt before WW2, making up one quarter of the local population. Despite suffering severe antisemitic violence and restrictions during the 1930s, the community survived, and after the majority emigrated to Israel, only a couple hundred remain in the town.